Required for Brokers and Managing Brokers Renewing their License

This comprehensive 6 credit hour course will give you a thorough understanding of the historical and societal context that shaped fair housing law, the current legal framework intended to prevent housing discrimination, how to recognize protected groups and protected activity under the law, and methods for reducing risk of liability for discrimination or disparate impact.

With this course, you'll be able to confidently serve all of your clients, regardless of their background or protected status, and avoid any potential legal trouble down the road. This course is required for all brokers and managing brokers renewing their licenses between June 1, 2022 and June 1, 2024, so don't wait - enroll today!

The United States has a long history of racial discrimination and segregation, which of course includes housing. Many Americans throughout our history have been denied or restricted access to lending, neighborhoods where they could live, and financial programs. This has been true not only in the South but here in Washington state as well. Unfortunately, this course has to exist because of the history and issues that continue to this day.

Broadly, racism is prejudice or discrimination due to a person’s race.

There are many types and ways to categorize racism, but we will focus on 4 types: structural, institutional, internalized and interpersonal. 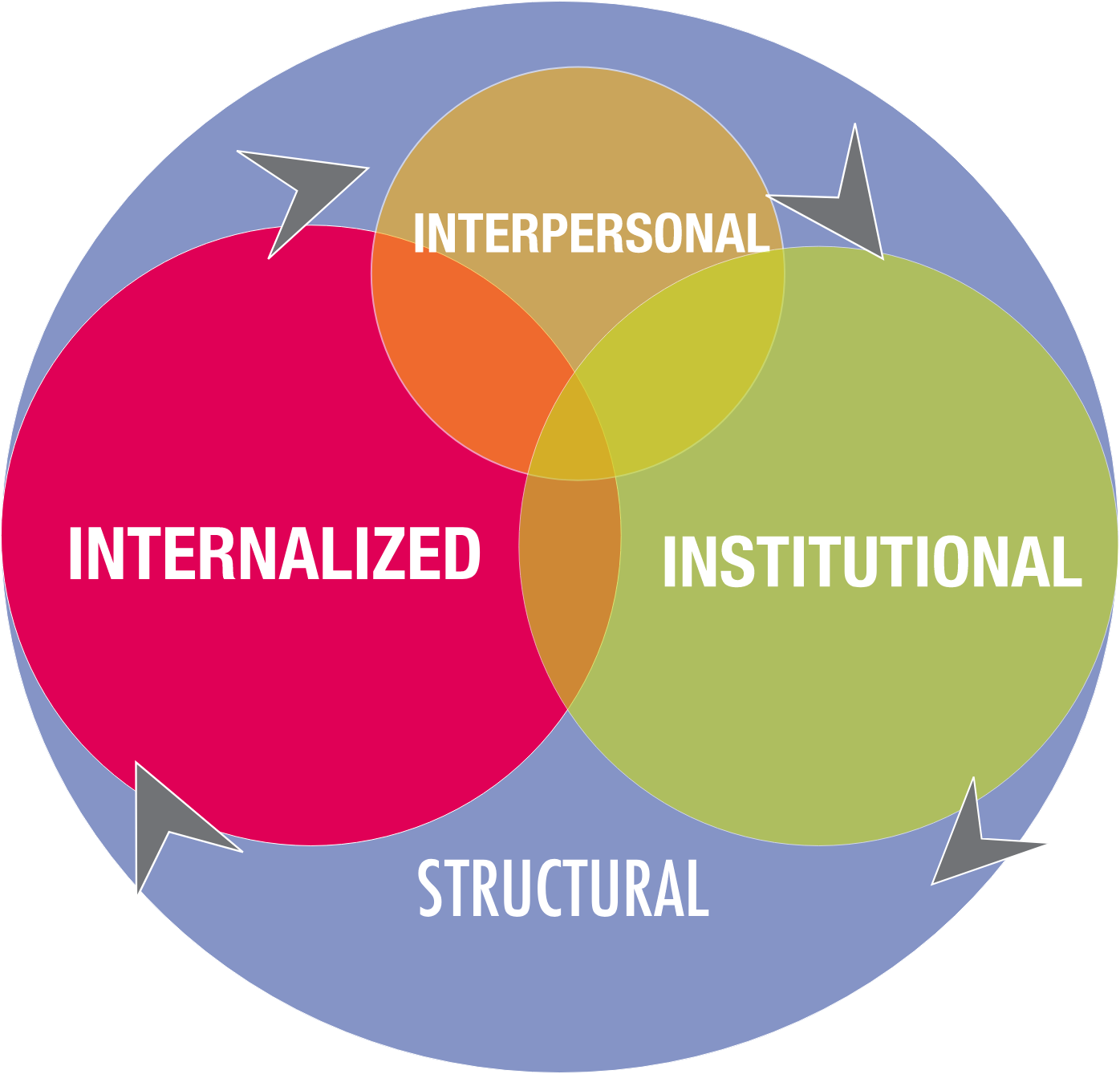 Structural racism is a result of our history and attitudes formed over generations. It seeps into and is codified in another type of racism, institutional racism. Structural racism is related to how a society is set up, how they are organized and the policies and traditions that have been put in place over time. This can include the way race is talked about and treated within an institution or in the media.

It can normalize historical and institutional practices that disadvantage people of color. It’s also true that even if a policy excludes a minority group and benefits white people, that would be an example of structural racism. It’s very much related to institutional racism which is the enforcement of the structural attitudes developed over time.

In their 1967 book Black Power: The Politics of Liberation in America Stokely Carmichael and Charles Hamilton wrote:

Systemic racism can be thought of as an invisible system which assumes superiority individually ideologically and institutional for white people.  Systemic racism is something that can be in a society consciously and unconsciously.

While individuals may not see themselves as racist they can benefit from systems which give additional benefits to white people.

Activist Peggy McIntosh came up with a quiz where you count how many of the following statements you agree with:

The quiz brings to light the idea that certain privileges can be taken for granted. We may not see them, we may not think about them on a daily basis but they still exist. Thinking about the alternative answers for each of the statements illustrates how different people do answer these questions in either the affirmative or disagree. Because some people can't say yes to the previous quiz questions shows some of us are granted privileges which others are not.

A 2017 study from Harvard by Katherine DeCelles illustrates one of these societal benefits in job hiring.

They summarize by saying,

Institutional racism is a subset of structural racism, which includes the practical rules and policies an institution has in place that better serves white people while not providing the same levels of service or even harming minorities.

During the Depression, the country faced a housing shortage and the federal government stepped in to help alleviate the issue. In doing so, they created programs which helped to segregate housing throughout the United States in a process known as redlining. Redlining came about with the formation of the Federal Housing Administration around 1934. The Federal Housing Administration committed to ensuring unpaid balances of borrowers who weren't able to make payments. What this did is allowed many to become homeowners and be able to qualify for loans since lenders were protected from default.

In the FHA underwriting manual, it included Maps which would define undesirable areas which were very clearly minority communities. In this manual, those areas were not eligible to receive sane mortgage insurance policies. You might think that this wasn't as nefarious or clear as I'm making it out to be but to quote the manual itself,

This policy of segregation is even more clear when you look at one of these maps. 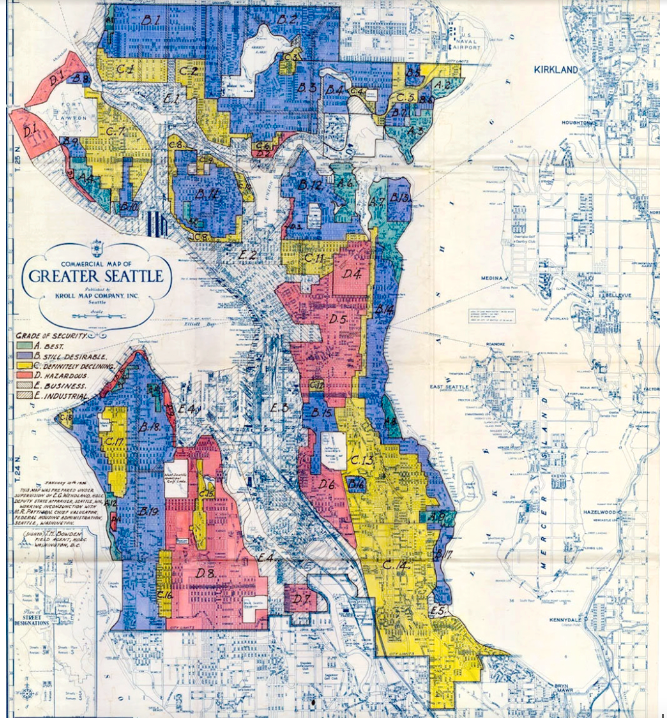 Spokane is another of the metro areas which had a map from HOLC, redlining certain areas: 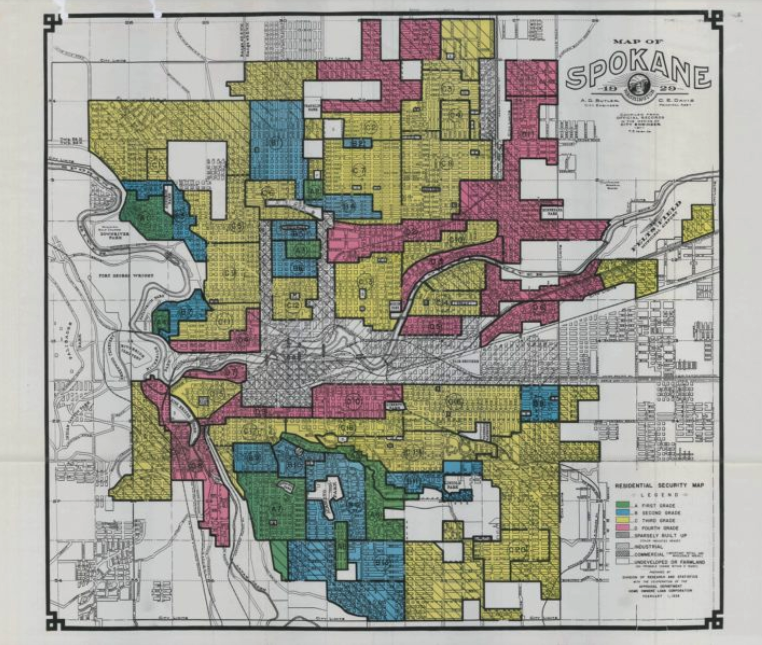 In addition to the federal government segregated neighborhoods many of the covenants in the Deeds of neighborhoods were restrictive based on race. For example, some of the Deeds stated, "No race or nationality other than the white race shall use or occupy any building on any lot."

The colors you see on the map had grades:

A (Best): These neighborhoods were usually upper-class white neighborhoods that we're seeing to be providing a very low risk of default for banks. one of the features it looked at was if it was ethnically homogeneous.

B (Still Desirable):  this classification was mostly if not completely white us-born citizens. These were seen as still desirable for lenders.

C (Declining):  These areas were typically populated with working-class as well as first and or second-generation immigrants. The neighborhood would often have older buildings.

D (Hazardous):  This grade was granted often to minority communities such as  Asian Mexican Jewish and African-American families.

Tacoma is another city in Washington which has a “security map” from the government: 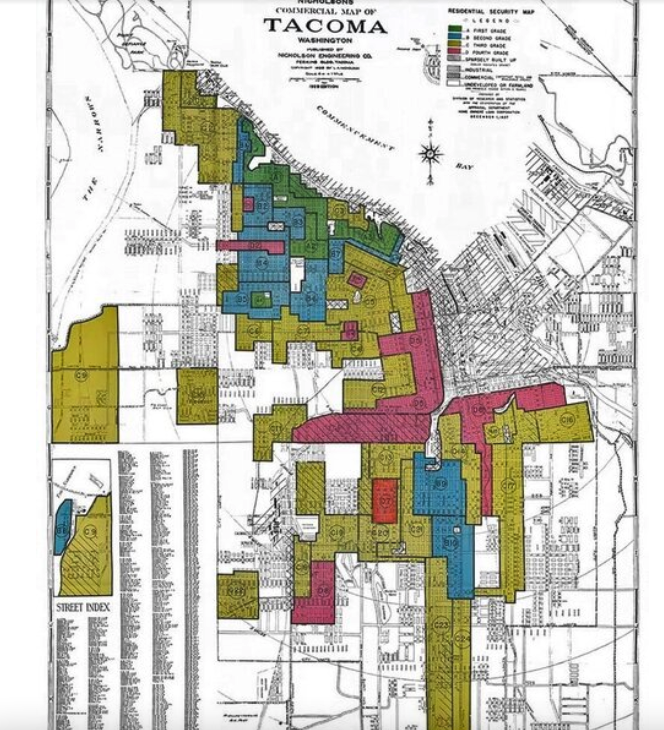 Interpersonal racism occurs between individual people. This type of racism is the one that is the most overt or well-publicized. It occurs when a person takes action as a result of stereotypes that they hold. It might be a hate crime, housing discrimination, negative comments about minorities, or racial profiling. Since these incidents are more obvious they are more likely to be reported in the media.

However just because this type of racism is reported in the media does not mean that most of the time that it happens it makes it to the media. Quite the opposite.

Internalized racism can come in a couple of forms. Through the individuals that receive benefits from historical events, media and institutional power. The second is from the group that is being oppressed. Over time a group of people that are consistently being disadvantaged can have attitudes which develop and impact their sense of self. Within the advantaged group this can lead to a sense of superiority and inflated self-image.  Examples include cognitive dissonance and paternalism. 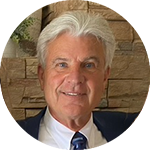 Don Sr. has been in the real estate business for over 40 years, working as a broker, running real estate offices, and developing property. He's the founder of Realestateschool.org and it's principal instructor. Don Sr. has a teaching degree from the University of Washington and has been teaching real estate for over 35 years.

What is your email?

It's free and only takes about a minute.

Thank you for signing up with Realestateschool.org. Please fill out the following to allow us to properly certify your course completion.

What state are you in?